A group of 9 of us representing Baha’i, Buddhist, Christian, Jewish, Muslim, Quaker and Universalist faith perspectives spent a glorious day together on Saturday 20th Nov. We started with a sharing circle, reflecting on nature and our role in care of the earth, followed by lunch and a walked around the Pondfield site. The afternoon was spent doing tree care, tending for the saplings we had planted as a group in March 2020. It was beautiful to see how they had grown and to free them from their protective guards and to add hay based mulch to add nutrients to the soil. There was a great sense of togetherness in coming together from such diverse backgrounds to care for the earth in this way. We were inspired by what each other shared in the circle and throughout the day.
We look forward to returning to Pondfield again in the Spring. Do join us by emailing defandevon@gmail.com. 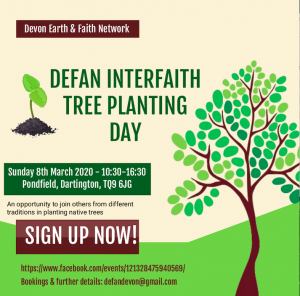 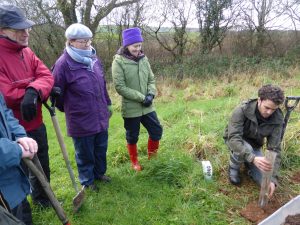 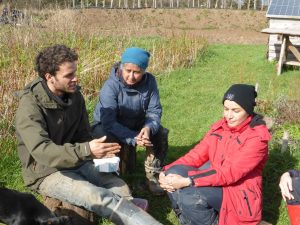 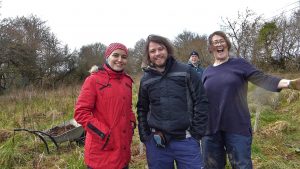 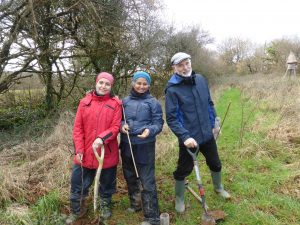 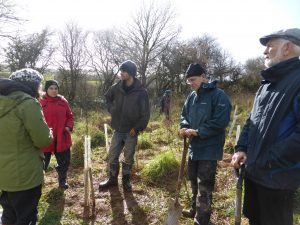 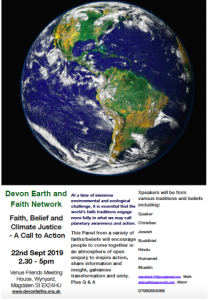 This is the panel of 7 speakers
Christian – Martyn Goss
Pagan – Adrian Harris
Muslim – Davide Pattineo
Jewish – Marc Franc
Hindu  – Sandya Dave
Quaker – Gerald Conyngham
Humanist- Lucy Mackeith
There was a 5 min talk from each speaker and then a mixture of Q and A, group work, brainstorming inspiring ideas to move forward in our communities and to work together, taking care of each other and our beautiful planet.  There was a choir song and a lively interval with much discussion and encouragement
There was a prayer and a short contemplative moment at the end
A spontaneous pop up choir sing ‘We got all the Love’ by Helen Yeomans after the interval
Led by Rev Alison Whittall (Onespirit Interfaith Minister and leader of ‘Heartsong in Exeter’) 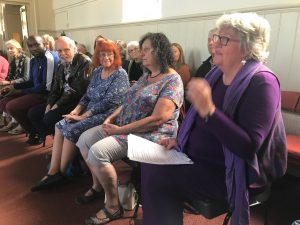 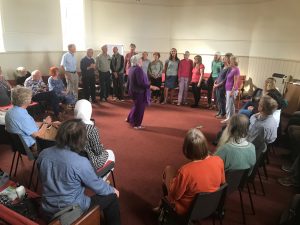 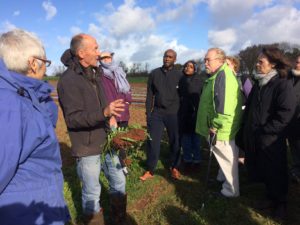 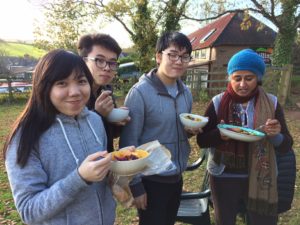 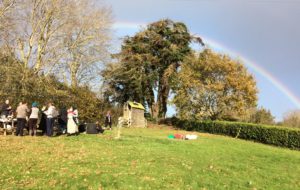 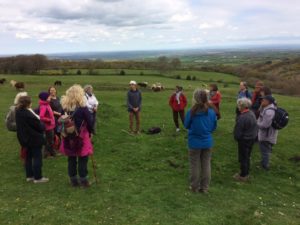 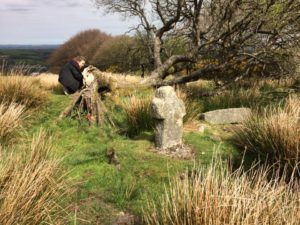 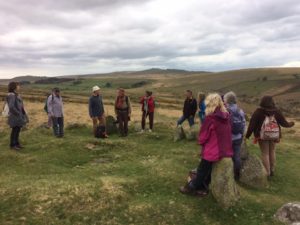 Words of reflection and inspiration: DartmoorSpringPilgrimageReflections2017

On Sunday 23rd April about twenty of us from diverse faith and belief traditions walked reflectively from Okehampton Camp on Dartmoor to nearby village of Belstone.  We were Buddhists, Christians, Hindus, Muslims, Pagans and others on a journey which took us to a Holy Well, the old chapel site of St. Michael’s, crossing the East Okemont River to the 9 Maidens stone circle and concluding at St. Mary’s Church.

On the route we shared silence, readings, poems and prayers from our communities, absorbed the glorious spring ambience and even sampled some of the native plants by touch, scent and taste.   We heard cuckoos, curlew, skylarks and more.  The scattered cloud formations coloured the diverse landscape around us and we were held by the beauty of the sacred Earth and the company of one another.

Over tea and cake at The Tors village pub, we wrote words of reflection and inspiration and those are published anonymously in the attached paper.

The event was creatively and sensitively led by Richard Dealler and was the sixth activity organised by the Devon Earth & Faith Network (DEFAN), with the support of Devon Churches Green Action and the Devon Faith and Belief Forum.

Nourishment of the imagination and inspiration for action – two ways of describing the multi-faith event at Westward Ho!, north Devon on 22nd October. Nearly 30 of us from different faith and belief traditions met at the Devon Earth and Faith Network (DEFAN) conference to look at Water – and our human relationship with it today.

In opening, church environment officer Martyn Goss referred to the challenges we face of Climate Change and the hydrological cycle, sea and water pollution, poor management of water supplies and the commercialisation of a natural resource – considered as a human right, as well as having benefit for the whole Earth.

Bideford Quaker Jacqui Poole spoke about the wisdom and motivation for the Society of Friends’ actions on sustainability, including living more lightly on the planet and looking for more equitable means of securing water justice for all.

Local muslim Hamzah Saied movingly encouraged us to listen to the sounds of breaking waves and to discover some of the deeper meanings evoked for us. He also encouraged us to recognise the importance of gratitude and humility for the intrinsic value that water has and which should never be taken for granted.

Participants were encouraged to bring a small bottle of water from their home areas – from taps, water butts, streams, etc. and to pour these into a pot as an act of hope and solidarity with one another, before the collected water was later returned to the sea in an act of sensitive integrity.

Jenni Braund is a local poet brought up in the area and she read some of her engaging poetry about water and the sea, following an ‘awareness walk’ when we gently and reflectively explored the nearby beach, rocks, sand, pools and waves.

The Editor of Resurgence and Ecologist magazine, Greg Neale, also lives locally and he took us through the significance of whales and our relation with these ultimate water creatures. From early awe and wonder in many religious stories, humans later evolved to see these massive mammals rather as sources of provision – meat, oil, skin, etc. Yet we have hunted them almost to extinction only to discover that they are perhaps the closest to human life in intelligence and communications.

So is our past wanton destruction of them a parable about how we really treat ourselves – as mere consumerism fodder and not the advanced part of nature that we really are, and with all the responsibility which that carries.?

From a quiet Hindu perspective, Sandhya Dave helped us to conclude our sharing by holding the pebbles we had collected on our ‘pilgrimage’, and to see these as reminders of the day and to recollect the significance water has for the whole planet and all life.

This poem by Pablo Neruda was read by Richard Dealler to sum up the event:

Everything on the earth bristled, the bramble
pricked and the green thread
nibbled away, the petal fell, falling
until the only flower was the falling itself.
Water is another matter,
has no direction but its own bright grace,
runs through all imaginable colours,
takes limpid lessons
from stone,
and in those functionings plays out
the unrealized ambitions of the foam.

The day was one of a series of ‘Earth Matters, Faith Matters’ activities organised by Devon Churches Green Action http://www.dcga.org.uk/ and the Devon Faith and Belief Forum https://devonfaiths.org.uk/ 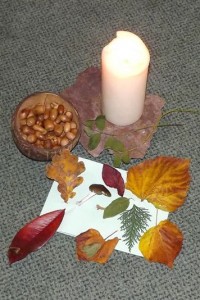 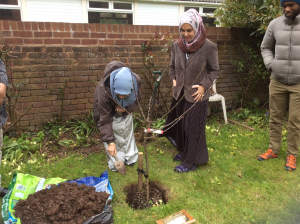 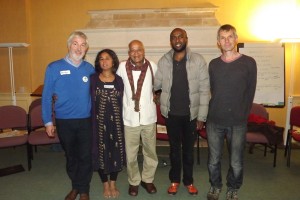 DEFAN brings together people from diverse faith and belief traditions concerned with green issues.  We hold regular events, share good ideas and practice and seek to support one another as we develop a more sustainable world.  These include ‘Earth Matters, Faith Matters’ conferences, Pilgrimages and practical activities.

At a time of immense environmental and ecological challenge, it is essential that the world’s faith traditions engage more fully in what we may call planetary awareness and action.  The Pope’s encyclical Laudato Si illustrates this well, with its call for a sense of urgency and profound review of our relationship with the Earth if we are to avoid climatic and other eco-catastrophes.

Many of our faiths already have action programmes – e.g. Operation Noah for Christians, Big Green Jewish, Green Muslims, and Hindu Kush Conservation Association – but we are not acting together at a local level.

Over 50 people participated in the second ‘Earth Matters, Faith Matters’ conference which took place at Exeter Mosque on 10th April 2016. Those participating included Buddhists, Christians, Jews, Muslims, Hindus and others.

The keynote speaker was Dr. Husna Ahmad, OBE who reported on her international work focussed on encouraging Muslims to address climate change in their own countries and communities. She drew attention to the story of Yusuf (Joseph) and how he prompted (the Egyptian Pharaoh into) longer-term thinking and planning for food security and to build up resilience for times of trouble. This has lessons for farming today which tends to emphasise immediate profit rather the good of the land and future generations.

Tony Reese, from Exeter Synagogue spoke on the importance of trees in Judaism, with their own festival and new year, and the importance of caring for trees, recognising all their contributions to life on Earth.

Others referred to local initiatives in planting and caring for trees in Devon, so appropriately those attending the day then planted a cherry tree as a gift to the Muslims of Exeter. Richard Dealler reminded those present of Martin Luther’s famous remark about “were the world to end tomorrow, I would still want to plant a tree today”.

A plaque was also unveiled with the words, ‘ This cherry tree was presented as symbol of beauty, hope and peace for the whole Earth to the Islamic community of Exeter on 10th April 2016 by the Devon Earth and Faith Network’. (DEFAN)

Martyn Goss, Environment Officer for Exeter Diocese said ‘This is a local demonstration of our solidarity with one another and with the Earth.’

It is hoped further multi faith environment events will be held later in 2016. Exeter Hindu Sandhya Dave hopes to organise a food foray in May and a Summer Pilgrimage on Dartmoor is also being considered.

DEFAN is organised through the Devon Faith and Belief Forum and Devon Churches Green Action.

This moment of crisis calls for a spirituality and ethics that will empower us to live in the web of life as sustainers rather than destroyers of the world. Ignoring this view keeps the church and its members locked into fatal irrelevance while the great drama is being played out in the actual wider world. But being converted to the Earth sets us who are the church and our ministries off on a great spiritual, intellectual, and moral adventure.

Instead of living as thoughtless or greedy exploiters, we, by conversion to the Earth, are empowered to rediscover our kinship and live as sisters and brothers, friends and lovers, mothers and fathers, priests and prophets, co-creators and children of the Earth as God’s good creation gives us life. This is our generation’s great religious adventure which is absolutely a matter of life or death. 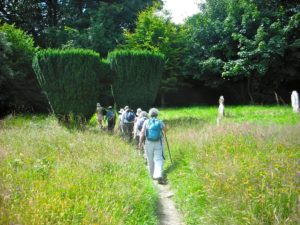 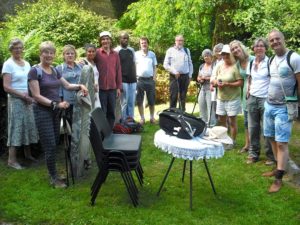 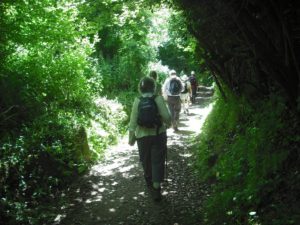